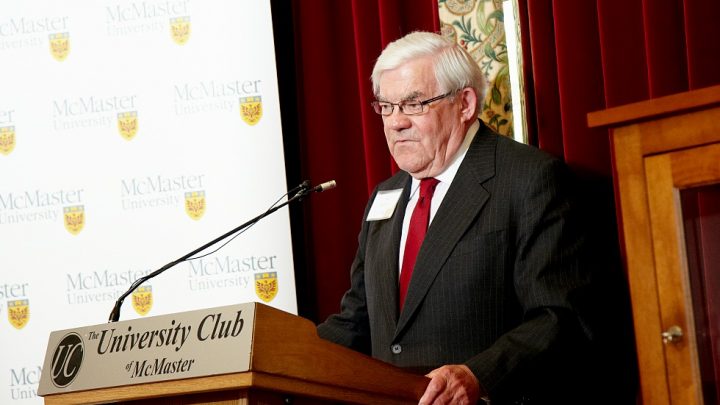 He’s remembered as a leading figure in the Canadian business community, an outstanding corporate citizen committed to giving back, a dedicated professor and an exceptional philanthropist who believed wholeheartedly in the power of higher education.

Long-time McMaster supporter and alumnus Paul MacPherson ’57 died last week, but he leaves a remarkable legacy — one that will continue to be felt at the university for generations to come.

A member of the McMaster community for more than 60 years,  MacPherson left his mark across campus, supporting hundreds of students in financial need, establishing a chair to advance Indigenous scholarship, creating fellowships to enhance teaching excellence at McMaster, and making an unprecedented investment in the McMaster Institute for Innovation and Excellence in Teaching and Learning, which was renamed the Paul R. MacPherson Institute for Leadership, Innovation and Excellence in Teaching in his honour.

“Paul MacPherson’s commitment to the importance of post-secondary education was, and is, inspiring,” says David Farrar, McMaster’s president and vice-chancellor.

“Through his giving, he made invaluable contributions to McMaster, ensuring that more students could access a university education, shining a light on the importance of Indigenous scholarship and culture, and advancing McMaster’s global reputation for teaching excellence. His dedication and vision will be sorely missed.”

MacPherson’s deep connection to McMaster began in 1952, when he took a “preliminary year,” a unique program then offered by the university, which allowed him to earn the credits he needed to enrol as an undergraduate. In 1957, he earned his Bachelor of Arts in geography from the Faculty of Social Sciences, then landed a job at Imperial Oil before going on to complete an MBA

MacPherson spent the next 14 years as a tenured business professor at the University of Guelph until, in 1977, he purchased Valcom Limited, which specialized in broadband antennas for the military. Under his direction, Valcom diversified and expanded across Canada, becoming a multi-million-dollar company, and exporting products to over 30 countries worldwide.

MacPherson’s strong sense of corporate citizenship led Valcom to support more than 20 community organizations including the Canadian Cancer Society, the Children’s Hospital of Eastern Ontario and the Ontario Special Olympics, to name a few.

MacPherson never forgot the importance of higher learning, often crediting his postsecondary education with providing him with the skills and opportunity to succeed as both a businessman and a professor.

In 1998, he became an integral McMaster supporter when he established the Paul R. MacPherson Bursary, created in response to MacPherson’s belief that all students should be able to pursue their educational goals. The award gives preference to students from MacPherson’s high school in Bracebridge, Ontario as well as to students from Indigenous communities.

“I probably wouldn’t have gone to university if McMaster hadn’t been there,” MacPherson said when the bursary was announced. “I know what a difference it made in my life, so it is indeed a pleasure to provide support for other students.”

The bursary fund remains one of McMaster’s largest and has supported more than 500 students.

Passionate about supporting Indigenous scholarship, culture, and art, in 2009 MacPherson established the Paul R. MacPherson Chair in Indigenous Studies, which contributes significantly to scholarship in Indigenous knowledge with an emphasis on preserving Haudenosaunee knowledge, languages, culture and history.

In 2012, he donated a significant collection of works by Indigenous artists to the McMaster Museum of Art (MMA), effectively establishing an important Woodland Collection at the MMA.

“Paul’s knowledge and respect for Indigenous peoples, his love of Indigenous art, and his generosity in giving artworks that provide relevant educational knowledge, ensures the importance of the MacPherson Collection of Woodland Art at the MMA for generations to come,” says Carol Podedworny, MMA director and chief curator.

“We are so grateful that he chose McMaster and the MMA to house this important and beautiful artwork.”

In 2009, MacPherson established the Paul R. MacPherson Teaching Fellowships, which provide exemplary instructors with opportunities to enhance their teaching, a reflection of MacPherson’s deep commitment to supporting teaching and learning.

Then in 2016, he made a landmark investment in teaching excellence at McMaster with a $5 million gift to support the Paul R. MacPherson Institute for Leadership, Innovation and Excellence in Teaching.

The institute has since provided significant new opportunities to develop and enhance evidence-based teaching and learning practices, and throughout the COVID-19 pandemic, has been instrumental in supporting McMaster faculty and students in the transition to virtual learning.

“Our work to support to the teaching and learning community at McMaster would not have been possible without Paul’s amazing generosity,” says Lori Goff, director of the MacPherson Institute.

“I thank him from the bottom of my heart for all he has done for us at the MacPherson Institute and the McMaster community. His kindness has created inestimable positivity for our instructors, and most importantly, our students.”

A supporter of the Class of 1957 bursary, MacPherson was also an active member of McMaster’s alumni community who rarely missed an opportunity to meet his fellow graduates at alumni events held over the years.

“Paul was such a character!” says Karen McQuigge, McMaster’s director of Alumni Engagement, who says that as a student, MacPherson was very active in campus life, once shaving his head to protest tuition hikes, a stunt that attracted the attention of McMaster’s student paper.

“One of my favourite memories was when Paul attended one of our alumni events with a large, framed picture and story to accompany it,” says McQuigge. “He asked to address the audience and regaled us with his story of how he ended up on the front page of the Silhouette, albeit without his hair. I can still hear the laughter. He will be a very much missed member of our alumni community.”

One of McMaster’s most valued supporters, MacPherson was inducted into McMaster’s Alumni Gallery in 2004, and in 2010 received an honorary degree in recognition of his business accomplishments and for his extraordinary contributions to McMaster. 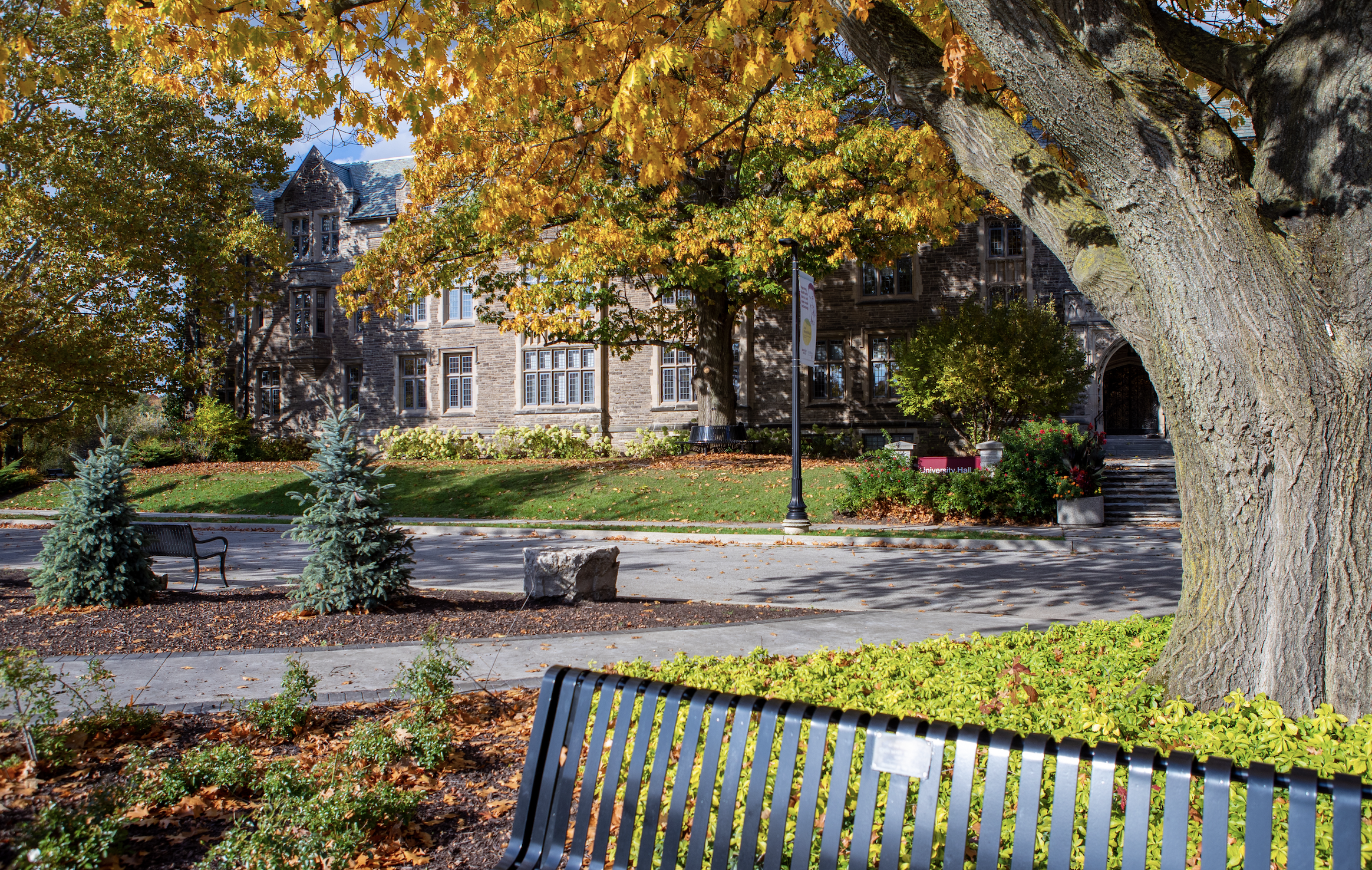 New Faculty 2021-22 Workshops hosted by the Office of the Vice-Provost, Faculty

New Faculty 2021-22 Workshops hosted by the Office of the Vice-Provost, Faculty: Read More 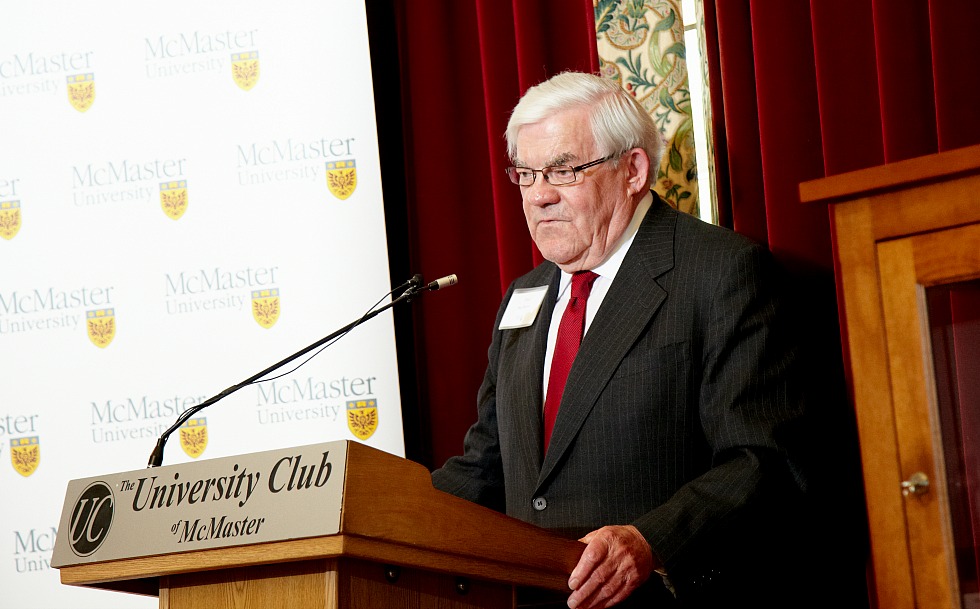 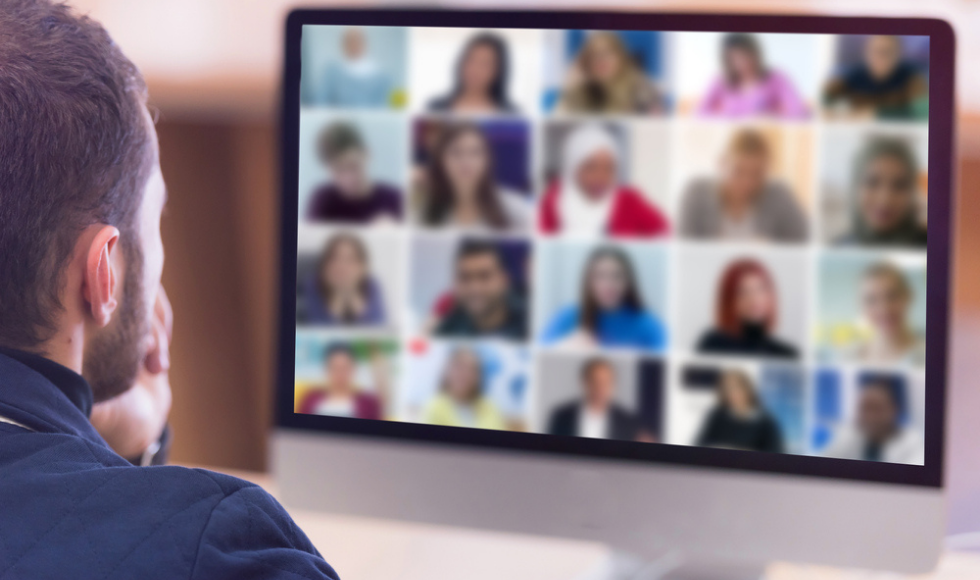 Tech takeaways from the pandemic: Using Echo 360 to extend the virtual classroom